Angelina Jolie, the end of standard, confused value, and not enough failure: why 2013 mattered

Some thoughts (and scribbles) on the health debate in 2013

Twenty-thirteen was an important year, partly because of Angelina Jolie’s breasts and what they meant for ‘standard’ care and partly because of emerging discussions around ‘value’. Where 2013 failed to deliver was in delivering acceptance around failure, but more on that, including why it matters, at the end.

You’ll likely recall that in May Angelia Jolie, the actress and director, wrote an op-ed in the New York Times about her decision to have a double mastectomy in response to her genetically-defined 87% risk of breast cancer. She described her decision as “preventative” and ended her piece saying:


“Life comes with many challenges. The ones that should not scare us are the ones we can take on and take control of.”

When I reflected on this with Scott Liebman, one of the Wellthcare Explorers, he told me of a friend with breast cancer – let’s call her Jane – who had decided not to have a mastectomy or chemotherapy (both of which were recommended by her doctor), but to have a lumpectomy. Jane’s version of taking control was to prioritise quality time with her grandchildren rather than spend months delaying the inevitable and feeling iatrogenically rotten.
Obviously the two women were dealing with different things – risk factors versus full-blown disease – and had different options defined by priorities and circumstance. But what it brought home to me was how health care is changing from a one-size-fits-all model to a more consumer-based one. This may seem obvious but the implications are massive; as more and more people define their own versions of healthy, the health care industry will no longer be able to rely on ‘standard’ treatments or ‘standard’ measures of success.

When it comes to ‘standard treatments’ there is an accidental honesty in all this. The truth is that for so many conditions – especially those brought on by lifestyle choices – we really don’t know what works. Sure, medical textbooks tell us how to prevent and treat things but how often do such interventions truly work in the real world of conflicting priorities and unpredictability? My sense is less and less (if they ever did). And given the growing number of people with multiple chronic conditions, have we cracked how to handle the complex interplay of their pathologies? No, not remotely. 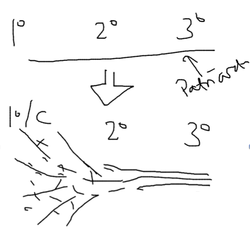 It was while reflecting on all this that I scribbled the diagram on the right. The horizontal line at the top reflects the current one-size-fits-all model of health care extending from primary to tertiary care. Once you’re in the system, guidelines generally tell doctors the precise steps that they should go through: the tests, the interventions, and the follow-up. But what underpins this approach is the assumption that doctors know best (the scribbled word is ‘patriarchy’); as described above, in many instances this is a highly questionable assumption.

The downward arrow in the diagram points to the world we’re moving to. Rather than rely solely on the health care industry for health-related value, it introduces the role and value of community (C), something the Wellthcare Explorers have been debating and discovering these last few months (see their three Despatches here, here and here). Community probably has its greatest value in the ‘primary care’ space, the very left, where lifestyle choices can potentiate disease. Once ill, people usually need clinicians, which is why the lines get less chaotic, but even then what they value will differ and the role of community persists – which is why it never becomes a single horizontal line.

I shared the above scribble with my mentor and he pushed my thinking further by asking what happens when tertiary care has nothing to offer and palliation is the only option. It’s pretty clear that, although there may be some value in medical treatment at that point, there is just as much – and perhaps more – to be gained from simple, non-medical comforts and being close to the ones we love. That’s why in the beautified version of the lower diagram (right) the lines splay at the very end.

Contrast the second diagram with the horizontal line at the top of the first. It’s a radically different way to see health and the role of health care. I don’t believe the health care industry is even remotely ready to handle this type of consumption and yet, as Jolie and Jane illustrate, this future is already here. In a previous post I have called this the ‘Wantified Self”.

This takes me to ‘standard measures of success’. At the start of the year I was lucky enough to attend a ‘value based health care delivery’ course at Harvard University. Part of what they taught were new ways to measure success (the numerator of value, with cost being the denominator) by collecting the outcomes experienced by patients rather than counting the processes performed by a hospital. At the time I found the thinking invigorating but my enthusiasm has waned through the year as the above diagrams took shape in my mind.

Obviously it’s better to measure an outcome than a process; knowing that surgery ‘worked’ is a vastly different – and better – piece of information than knowing an operation was performed. The question is, who defines ‘worked’? Harvard’s thinking – which has manifest into the International Consortium for Health Outcome Measurement (ICHOM) – seems to be that we can get a group of clinicians to come up with a metric. But such an approach will only ever generate the ‘average’, something that is unlikely to meet the more individual needs of a Jolie or a Jane.

All is not lost in the value movement, though. Wellthcare Explorer Rupert Dunbar-Rees is pushing thinking through his ‘outcomes parties’ (co-arranged by Emma Stanton of Beacon UK) at which he asks ‘service users’ (ie patients/citizens) what an outcome is to them. This video of their work includes the simple-yet-awesome line: “Some of us want to live until we die”. I realise ‘live until we die’ is a nebulous outcome to target but to my mind it’s a better starting place than an outcome predefined by a group of clinicians who don’t know their Jolies from their Janes.

The tension in the value movement seems to come down to whom the new thinking is serving. Harvard/ICHOM openly declare that they’re focussed on strategy, which means they’re biased towards the needs of health care management. Rupert and Emma’s ‘outcomes parties’ start from the needs of citizens. It’s early days for the movement so it may be that the two approaches meet in the middle but to my mind ‘outcomes parties’ seem more aligned to where the demand for health care is going, as depicted in the diagrams above.

My final reflection on 2013 is on failure. Health care is in such dire straits that we need more failure. That may sound paradoxical but we need to listen – and actually hear – the oft-quoted fact that over 90% of start-ups fail (or that only 10-30% of innovations by established companies make it to market). A New York-based entrepreneur and friend told me that the biggest reason why the UK is becoming irrelevant in the future of health care is because failure is still associated with shame and embarrassment, whereas in more innovative societies it is valued as a way to understand what doesn’t work in order to focus on what might. A UK-based investor echoed this by saying that accelerators (organisations that incubate start-ups) fool themselves into thinking they accelerate success, whereas what they really (should) do is accelerate failure so others know how not to do things.

Failure may seem tangential to the rest of this post but it’s not. There is no road map for how we move from a one-size-fits-all health care model to a more consumer-led one. We don’t know how to get our prevention and treatment to work in the real world of conflicting priorities and unpredictability. We haven’t even started to work out how to assess whether an outcomes-based approach is more effective than a process-based one. And we are yet to truly understand how to activate the latent value that sits in our communities.

We need to experiment more. And to do that we need to accept failure more readily. That’s why I hope to see more of it in 2014.

4 thoughts on “Angelina Jolie, the end of standard, confused value, and not enough failure: why 2013 mattered”