Despatch 2: Fragmenting Communities and the Wantified Self

A report on the Wellthcare Explorers' second debate, this time about the idea of the 'wantified self'

In our ongoing quest to find new, health-related value, the Explorers met on the 8th October 2013 to discuss the “wantified self” and the impact of fragmenting communities as a result of economic migration. At the foot of this post is the full report (PDF) of the 90-minute discussion written by the Wellthcare Correspondent, Leigh Carroll. 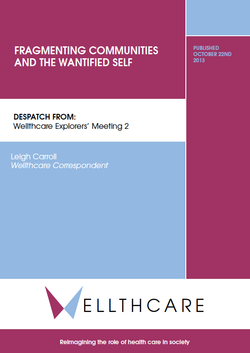 One of the things that became apparent during the discussion is that, although we are seeking to understand new, health-related value, at the heart of the discussion was the desire to “reimagine the role of health care in society”. As a result, you’ll now see this strapline on the report and this website.

The other change is how we are defining “wellth”. When we launched we described it as: “reclaimed currencies of health, delivered through new technologies, nurtured and protected by intimate communities”. Our discussions are taking us further and further upstream so it felt time to re-examine this definition, especially as many people were confused by the term “currencies” and one person asked me if “intimate communities” was an allusion to group sex (!).

The new, more-encompassing, definition is: “new, health-related value, defined by what people want to do, supported by their nano-networks”. This brings to the fore the idea of the “wantified self”, people defining what they want to achieve rather than being told by the medical industry what they should consume. It also consolidates the role of people’s small networks as it’s increasingly accepted that our behaviours are more influenced by those around us rather than what we may be told by health professionals.

In my recent Log post I talked about the need for agility and to embrace uncertainty. We very much feel like we’re trying to carve open a new “space”, or dialogue, in health and health care. It’s hard. But as we keep debating the nuances of what Wellth is, we have no doubt that the definition will iterate further, although perhaps only incrementally now that the Explorers are largely on the same page.

We know that many of you will not have the time to read the Despatch in full so below is the summary.

Pritpal opened the call by introducing the concept of the “wantified self” as a way to more deeply understand what people want in order to provide the appropriate care. He asked Explorers to consider a system of health care that is driven by demand (what people want) rather than on supply (determined by the industry).

The Explorers noted that understanding people’s wants and meeting them where they are is the only way to achieve success in any endeavour, and a focus on the wantified self will allow Wellthcare to provide services that address the core of what matters to people.

The Explorers engaged in a discussion of needs and wants, concluding that they often overlap and can be indistinguishable from each other. Several Explorers contended that Wellthcare’s focus should not be trying to distinguish between wants and needs but rather on understanding how to give people the tools to reach both their expressed and unavowed goals.

There are many people working on the notion of goal-oriented care, and Explorers discussed several examples of ways in which people are trying to measure what is meaningful to people in order to provide more personalized care. They also discussed how a better understanding of the “self” might lead to a clearer understanding of people’s wants and goals.

There are many limitations to focussing only on health and disease, and if Wellthcare is to be successful it must work within the broader sphere of life. Explorers discussed the quantified self movement as one attempt to reach into and put numbers on parts of life that lie beyond health care. However, they noted that quantification in the absence of context is meaningless.

Wellthcare could be an opportunity to build on the quantified self movement by delving into the context that surrounds the numbers and uncovering patterns in the outer circle of life beyond health. This context includes a network of others, and Explorers described ways in which a person’s wants are contextualized and complicated by social environments.

Communities and the structures of social networks are changing, and Pritpal suggested that part of the work of the Explorers might be to better understand the shape of future communities in which Wellthcare will operate. Several Explorers observed that sometimes communities look fragmented, but if people look beyond the linear geometry they’re accustomed to they will see a great deal of order and cohesion that did not exist in the past. These emerging connections and communities will be the future protectors and creators of wellth.

Finally, several brief comments alluded to an emerging definition of wellth, and how wellth relates to care and communities.

The Explorers’ discussions are incredibly rich in content and nuance. They are helping to define a new way of seeing health and health care. However, as a friend recently told me there are no new ideas, just new ways of seeing things. Our hope remains that if we can create a new lens on the role of health care in society we can catalyse the creation of new value, something that is sorely needed now that the health care industry is unsustainable the world over.