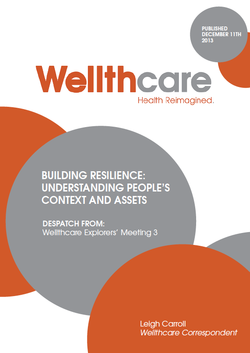 Today, we’re publishing the third Despatch from the Wellthcare Explorers. In it we discuss the importance of people’s context, largely because it came up so many times in the second Despatch when we discussed wants and needs. I also wanted to tie the idea of context to resilience and ‘asset-based health’, the latter being convincingly described by the Glasgow Centre for Population Health (see the PDF of their 2011 report).

At the end of this post is the Summary, succinctly delivered by the ever-impressive Wellthcare Correspondent, Leigh Carroll.

The exploration being reported on in this third Despatch happened at the beginning of December but the report has been delayed by my recent trip to the US during which I was prospecting for Wellth (see the related Log post). This has given me a chance to reflect further on the discussion.

We’ve always been open about the fact that we’re searching for Wellth, part of the process being that we’ll refine our definition as we go (the last refinement was described in this Log post). At the time of the discussion the definition was: “new, health-related value, defined by what people want to do, supported by their nano-networks”. The italicised bit was based on the belief that our behaviours are most influenced by our closest friends but we also need to recognise that their closest friends also influence them. That likely means that ‘support’ happens at two levels (at least) – one’s nano-network and one’s broader community.

When people think about the support available through communities they often default to the term ‘social capital’. I find the term problematic because, as Wellthcare Explorer Lorenzo Rocco says in the Despatch, we do not know what it is but we know what it does. What it does seems to be to act as a glue that holds people together – and that the glue is likely to be based on trust.

So, are we saying that trust is the key to Wellth, the new, health-related value that we’re searching for? And if so, is that so amorphous that it’ll be impossible to deliver?

It’s certainly a challenge but no bigger a challenge than the pioneers of ‘micro-finance’ faced during its exploration. As Wellthcare Explorer Kingshuk Das reminds us in the Despatch, the micro-finance pioneers used people’s livestock as collateral against small loans. Although that might make sense to us now just imagine the response from sharp-suited bankers when it was first suggested. We need to look hard at what trust is because it may be a more leverage-able asset than we’re giving it credit for.

According to Lorenzo, the value in communities is often killed by formal systems, such as those provided by governments and corporations. Looking at it the other way, he says that in the absence of formal systems people use their latent capacity to create informal services for each other.

The contemporary manifestation of these “informal services for each other” seems to be volunteering and time-banking. I have had a number of people ask me if Wellth is simply time banking hiding under a fancy new name. My answer is an unequivocal no (surprise, surprise) because, although the descriptions seem to be the same, time banking does not explicitly try to build trust nor is it based on an understanding of what people want to do with their lives (what we’ve termed the ‘wantified self’). As a result, although undeniably valuable, its value is short-term and hence not a sustainable source that will meet the growing need for care.

Continuing our embrace of the seemingly amorphous, Wellthcare Explorer Sally Okun referenced the Serenity Prayer (I had to look it up), which is often shortened to accepting the things you can’t change, having the courage to change the things you can, and knowing the difference between the two. Her observation was that people who demonstrate resilience seem to be those that more readily accept change. This has made me think of a blog post by the often-excellent Bill Gardener with the inflammatory title, ‘Stupid, incompetent, unhealthy people’. In it, he deconstructs the notion that we need to educate people to ensure they live more healthily by going upstream and suggesting that it’s scarcity that leads to bad, health-related decision-making and that “ensuring substantive equality of opportunity” may be a more sustainable way to generate better health-related behaviours.

Overall, I’m left with the idea that if we give people a chance – a chance to understand need and self-organise – they may well surprise us.

This, once again, questions the patriarchy that defines much of health care provision these days. I’m seeing this more and more in the kind of messages we’re getting from the public health community who are busy rebranding themselves as ‘population medicine’ experts. I’ve often felt uncomfortable by the kind of ‘advice’ dished out, often irrespective of the contexts that people find themselves in. It makes me think that, despite an appearance to the contrary, their analyses are shallow because of a lack of true understanding of people’s context. I can’t help feeling that between the ‘n of 1’ and a ‘population’ there is a smaller unit, still a network, and that that’s the level at which we should be engaging.

My final amorphous embrace is the idea of ‘meaning’, challengingly put forward by the Wellthcare Explorer Maneesh Juneja. As a digital futurist, he is continually exposed to what we’re doing with digital technologies compared to what we could be doing. His contention seems to be that, despite excellent models about behaviour change, digital technologies will always fail if we don’t address whether people have a sense of purpose, an idea that is alluded to as ‘relatedness’ in this recent article in Wired.

Providing a sense of purpose, however, may drive us into ethically awkward places, such as seems to be the case in the Netherlands where there is an initiative to re-socialise alcoholics by paying them partly with beer through their working day. “You have to give people an alternative, to show them a path other than just sitting in the park and drinking themselves to death”, the Director of the Foundation said in a recent article in the New York Times. My view is that embracing this awkwardness makes sense, perhaps even economic sense, and is an example of starting ‘where people are at’ in order to generate new, health-related value.

But enough of my post-hoc reflections; I’ll leave you with the excellent Summary by the Wellthcare Correspondent, Leigh Carroll.

The third Explorers’ call had themes: the substances that bind and move people; ways to explore asset-based health; and measuring the value found in networks.

The Substances that Bind and Move People

The Explorers brought up several entities—trust, meaning, and resiliency— that bind people in nano-networks, change the way people act and relate to others, and ultimately influence the movement of the network.

The Explorers first discussed trust and its importance in building social capital. Explorers noted that communities that are optimistic of others’ trustworthiness tend to gain practical and economic benefits, and that perhaps trust is one thing that differentiates sustainable relationship-building services from transactional services such as time banking.

The Explorers also talked about the idea that our lives have meaning, and proposed that this is one of the strongest drivers of a person’s search for wellbeing. This is something that device manufacturers need to understand they felt.

Resiliency is another important characteristic of strong and healthy networks, and the Explorers suggested that perhaps there are ways to build it up within a community by promoting certain assets and behaviours.

The Explorers also discussed possible processes, guidelines, and core values that it might use to explore a community’s health-related assets.

First, Wellthcare could develop methods for institutionalising the discovery and use of assets. Assets can be discovered by standardising procedures for learning about people’s lives outside of health care. Wellthcare could also create and value new professional roles and spaces for learning. For example, Explorers noted that there should be more opportunities for two-way listening between caregivers and care receivers, and more formal roles for people who can facilitate these exchanges.

The Explorers suggested that Wellthcare look outside of health care for examples of community based models that provide disruptive alternatives to corporate models. It should also look across cultures at informal systems that arise in communities with less developed formal infrastructure to learn how community-driven health care systems can co-exist with corporate models.

As it continues to explore asset-based health, Wellthcare will need to understand what health looks like to both individuals and groups. Individual perspectives of health and care provide depth and nuance that cannot be found when looking broadly at groups, and studying groups can lead to the recognition of patterns and themes that can help Wellthcare to develop systematic approaches to care.

Measuring the Value Found in Networks

Finally, the Explorers discussed ways to better understand the value of networks and the impact that networks make on health. They noted that Wellthcare will need to measure health progress at a network level as well as at the individual level.

A shorter version of this post was published on MedCrunch.