It’s becoming fashionable to say that health care is really ‘sick care’ but who is really trying to work out what caring for health means? One group in the Nijmegen Area of the Netherlands is leading the charge and I was lucky enough to speak with its chief organiser, Chantal Walg.

Pritpal S Tamber: Hi Chantal. We probably should start with how you’re defining ‘health’ seeing as it’s at the core of what you’re doing.

Chantal Walg: Hi Pritpal. We use the idea of ‘positive health’, as described by Machteld Huber in a 2011 article in the BMJ. She argued that WHO’s definition of health as ‘a complete state of physical, mental and social well being’ was no longer fit for purpose given the rise of chronic diseases, especially in the elderly. She proposed an alternative: ‘the ability to adapt and to self manage in the face of social, physical and emotional challenges’. It has six domains: physical functioning, mental well-being, social participation, daily functioning, meaningfulness. and quality of life. She called it ‘positive health’.

PST: Ok. So how far have you got with this alternative definition?

CW: Our mission is to have all local organisations thinking and acting according the concept of positive health by 2020. So far, 24 organisations have signed up, from welfare, public health, health care (ie sick care), and organisations representing citizens. To help them explore what it means to operate as a positive health entity we’ve established a network with several working groups on cross-cutting topics, which are populated by people from any and all of the organisations. One such topic, for instance, is communication; what does communication within and between organisations – and towards the citizens – need to look like if all were focussing on positive health? Another is on information technology; what would it mean for their organisations if they were about positive health rather than sick care?

PST: Sounds interesting. Let’s go back to the beginning; how did all begin?

CW: In 2012, I was recruited by Syntein, an organisation looking to improve the coordination of care of people with chronic conditions. My job was to build prevention into the care chain, including improving the links within the welfare system and with the community (my background is in being a public health advisor to community health services). After a year I realised that ‘prevention’ isn’t really something that people want, it is not seen as a common goal. It’s too focussed on a possible negative, a sickness, rather than a positive that people would strive for. It’s essentially disease care, not health care. But that made me ask, what is ‘health’, exactly?

CW: Everything in health care has to be evidence based and yet there is no consensus about what health is. I found that strange. The WHO definition is unrealistic. I wanted to organise around a new concept, one that allowed for the possibility that besides sickness you can also be healthy. It also needed to be open to the possibility that people can self manage and be resilient when facing changes in their lives.

PST: Ok, fine, you found a better definition of health. How did you get these 24 organisations to embrace it?

CW: It helped that the region was already thinking about the growing demand for care and its ability to respond. In 2013 there was a meeting called, Together, Liveable and Healthy. Numerous senior leaders, including directors of health care, welfare, mental health, local businesses, local tourism, and education attended. There were 90 directors in all. The meeting included five workshops that tried to explore the local challenge through different lenses. One of them was organised around Machteld Huber’s ‘positive health’. At the end of the meeting, the participants were asked to indicate their preferred workshop. Forty-five chose positive health and, from them, a working group of 10 volunteers was created. 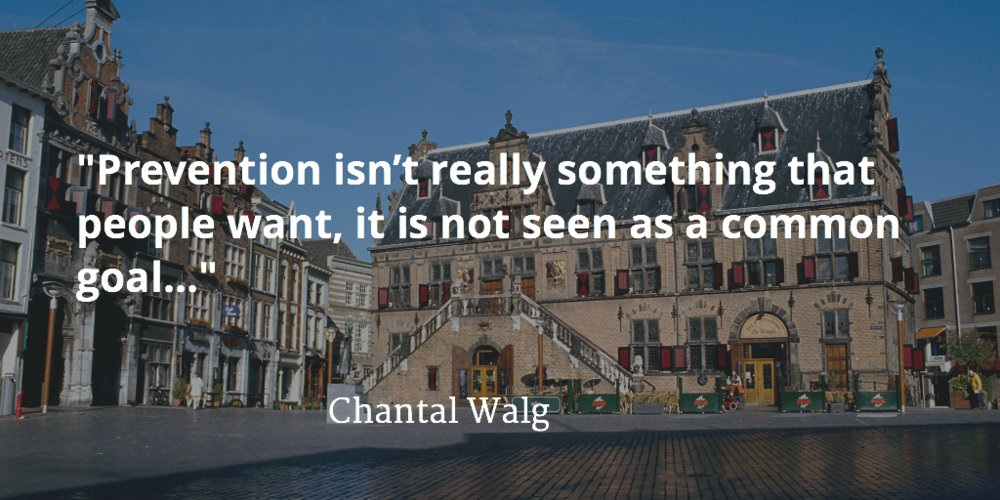 PST: What were they volunteering for?

CW: To explore what it would mean to implement the concept into their work. Rather than assume the problems and start designing solutions, we used appreciative enquiry to ensure that we genuinely understood the issues. Over the last 2 years the group of 10 people has evolved into the 24 organisations and the network that I mentioned.

PST: So give me a concrete example of how things are changing.

CW: A group of general practitioners (primary care physicians) have embraced positive health as the organising force for their practice. This means taking more time with a patient; not focusing solely on the clinical problem but also considering the six domains. At first, this takes more time but the GPs feel the extra attention spent searching for the real issues provides many health benefits, which save time in the long run. We know, however, that our challenge is to be able to measure these health benefits and time savings. We’ve not answered how to do that yet, although we’re working with an insurance company to give us the time and space needed to go through the process together.

PST: Interesting. Tell us more about that.

CW: The general practitioners are receiving an ‘innovation budget’ from a health insurance company to explore and implement this new way of working. It will last three years. It means the GPs are not reimbursed based on the number of consults they perform, which is the current way, but on a fixed sum per person registered in their practice. It gives them the financial space needed to try, and refine, their new approach, and, we hope, illustrate that it makes good business sense for the insurance company to change how they finance primary care.

PST: It sounds like they see your work as a form of R&D that they might one day incorporate into what they do. Give us a sense of the other work happening.

CW: A large care organisation is applying a positive health lens to how it deals with sickness absence in its 3400 employees. A welfare organization has adopted the concept in their vision, making the link between welfare and care more easy during execution. A higher education organisation has incorporated it into their curriculum. And, more and more, we are seeing it applied to how internal meetings in different organisations are structured, helping people to ‘see’ it in their daily work, rather than be an abstract concept.

PST: Fascinating. So what’s the next big challenge for you?

CW: For the transition in health care we need to find ways for people in the different organisations to link and share their new approaches. We don’t think we have to develop new things, as such, more that we need to adjust our current work to support the ideas of positive health rather than just treating or preventing diseases. We also need to monitor how they’re doing so we can understand what’s working. We also want to engage the local community by using tools like social marketing, communication and inspiring stories from local personalities. After all caring for health is something all of us should be part of.

PST: It’s great to hear of someone actually trying to make health care, rather than sick care, happen. Well done, and keep going.

CW: Thank you. Yes, we will. Our dream is to discover what health care really is and that local rules and regulations support it. We don’t want to just do what’s possible from the current system but to make possible what is needed.

I’m always more impressed by doers than talkers. It seems to me there is no end of rhetoric on the need to focus on health rather than sickness but to make that happen, as any entrepreneur will tell you, you just need to start. The leaders of the Nijmegen Area of the Netherlands, especially Chantal, are to be applauded for venturing into the unknown.