Effective Housing Goes Beyond a Home

Paul Taylor, Innovation Coach at Bromford, a housing association in the UK, describes why building homes is not enough

As the health sector begins to respond to the fact that our social circumstances are important to our health, a common focus is on housing. The logic is obvious; cold, unsafe and sometimes toxic housing is clearly bad for one’s health. But is there more to housing than providing a warm, safe and non-toxic roof over your head? Today’s interviewee is Paul Taylor, the Innovation Coach at Bromford, a housing association based in Wolverhampton, UK. Over the last six years or so, Paul has been helping the organisation think less about buildings and rent and more about relationships.

Pritpal S Tamber: Hi Paul. Given that we have an international audience you better start by explaining what a ‘housing association’ is.

Paul Taylor: The lack of affordable housing is a worldwide problem affecting increasingly diverse groups. It’s been fuelled by rising rents. Many people are spending more than a third of their income on housing. As costs spiral there are all sorts of effects on society, notably homelessness and pressure on people’s health and wellbeing. Housing Associations are non-profit organisations that are one solution to this problem. We borrow money secured by loans to build lower cost homes to rent or buy.

Pritpal: That seems simple enough. So, why does Bromford need an ‘innovation coach’?

Paul: Well, on one level it’s very much like what’s happening in health. Demand is outstripping supply and there’s no new funding. In response, there has been a growing trend of mergers and acquisitions. There’s no doubt that in a few years there’ll be fewer players in the sector so if we don’t want to be swallowed up by someone else we need to think anew about the value we’re providing. Just building and renting homes is no longer enough.

Pritpal: Oh, I see. Ok, so in what area are you innovating?

Paul: A significant amount of our costs go into responding to the issues that our communities face, from economic insecurity to social isolation – and of course difficulties with paying the rent. Our approach was to react rather than pre-empt so we decided to look at how we might change if we tried to be one step ahead of the issues we know are out there. Through that work, we realised that we can’t offer solutions to all of life’s challenges. However, we can work in a way that involves giving power to communities so they can solve their own problems. We’ve realised that our role is not just about building more homes, it’s about building better communities.

Pritpal: That’s quite a shift.

Pritpal: Interesting. But if you’re fundamentally re-thinking the business you’re in – from housing to well-being – what does that mean for how you work?

Paul: Part of what we realised was that we’d become distanced from the people we serve. We recognised that if we were to truly reimagine the business as a well-being one we needed to reimagine our relationships with communities. That meant rebuilding – or building for the first time – a lot of trust. Imagine you’re a resident with a drug or alcohol dependency and you’re getting into debt. Why would you discuss that with your landlord knowing they could evict you?

Paul: Right. However, to build that trust we needed to free our frontline staff from a lot of rules and bureaucracy. They were getting in the way of them building genuine trusting relationships with residents. We had a hunch – without much evidence at the time – that if we simply believed in our people and took away all of the bureaucracy they’d have conversations with residents and make the right decisions. So, we switched our model. We retrained our ‘managers’ to become ‘coaches’. A crucial part of that was to stop looking at people as problems to be solved and to see their skills and life experiences. That was a complete turnaround from where we were.

Pritpal: Brave. So, have you tested out your new approach?

Paul: Absolutely. We’ve essentially been in five years of testing and phased implementation, and I think there’s a good few years to go. We began by asking our frontline colleagues to try out six different roles. They were essentially new ways of working. We combined the roles that appeared to work into one new role, the Neighbourhood Coach. We then piloted the new role across two large communities and ran a control in another. The pilots showed that residents felt more supported, more in control of their finances, and even some beneficial effects on their wellbeing. We also saw less demand for our support services (that cost us money to run) and improved financial performance.

Pritpal: That’s impressive. So, have the pilots taught you enough to roll out the coaching model across the whole organisation?

Paul: Yes – which is a significant challenge. We are quite a sizable organisation: 1800 colleagues, a turnover of £270m (US$350m), and plans to invest £1.5bn (US$2bn) on new homes over the next 10 years. Changing such a huge machine requires completely rewiring the organisation through strategy, people and systems. You’re asking people to work in ways that are alien to many traditional organisations; no set hours of employment, a personalised service based around what works for each customer. This can be uncomfortable for some and we’ve had to help colleagues who didn’t want to be a part of it to move on. Coaching is as much a change of mindset as it is of skillset.

Pritpal: That sounds huge. I understand there is a push for digital transformation in the sector too; are you also embracing technology as part of the process?

Paul: I’d say we are cautiously optimistic about digital. Yes, we are in the middle of a transformation programme, and we’ve bravely ditched all our legacy systems. But it’d be wrong to see that as being about technology per se; it’s more about simplifying our ways of working. I have concerns about organisations rushing to technology for solutions. Technology has the potential to be a barrier between us and our customers and so with each digital transformation project we ask ourselves whether and how the technology is changing our relationship with our clients.

Pritpal: That’s such an important insight. So, when will the shift to the coaching model be completed?

Paul: I could paint you a very positive picture and say we’ve rolled it out successfully across the whole organisation already. However, the closer we get to our customers the more opportunity we see to cede greater power and decision-making to frontline colleagues and communities. The challenge is to balance that personalisation with a financial model that generates profits and satisfies our lenders. I see our change work as the norm. Amazon, for instance, has never had a transformation programme; they exist in a state that says that change is perpetual. Truthfully, I don’t know what the end state looks like, and I don’t think the CEO or Board do either. For us, that’s an exciting place to be.

Pritpal: That’s a great point to end with. Thank you so much for sharing your work with me.

Paul: Thanks, Pritpal. I’ve enjoyed talking. If any of your readers want to follow up on any of the points they can contact me directly.

While it’s right and proper that the health sector thinks more about people’s housing, what I’ve learnt from Paul is that just providing a home is not enough. Clearly, it’s a start – and certainly not to be dismissed – but, based on Bromford’s experience it clearly is only that – a start. Given the myriad challenges people face the only way through has to be to create the conditions for them to step into their power. For systems used to ‘providing’ that’s clearly a challenge but one that they – like Paul and Bromford – have to rise to. 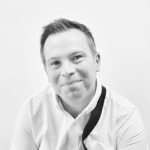 Paul Taylor is Innovation Coach at Bromford, a housing association based in the UK. He leads service design for their transformation programme, as well as acting as an internal disruptor and challenger. In 2013 Paul established Bromford Lab as a new way for the organisation to embrace challenge and adopt a ‘fast fail’ approach to open innovation. Nearly everything the Lab works on is openly accessible at www.bromfordlab.com. Paul is a regular speaker and adviser on innovation and a frequent blogger and contributor to publications and reports.