How a Postal System Can Keep Us Healthy

An interview of Joe Dickinson of Jersey Post, the postal system that checks in on its elderly community as part of its rounds

“Give me an example.” 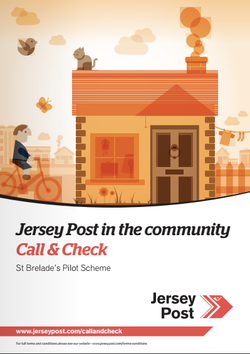 This is the most common request we get at Wellthcare, the most recent being over lunch in Manhattan. I was dining with Scott Liebman, one of the Wellthcare Explorers, and his friend wanted a concrete example. I replied with my favourite example, Jersey Post’s recently launched ‘Call & Check’ service and today we’re lucky enough to be sharing an interview with its founder, Joe Dickinson.

MedCrunch: So, Joe, tell me about the proposed service of ‘Call & Check’?

Joe:  It was based on the needs of a rapidly aging population and how a postal operator could help in the community’s jigsaw. It’s a very simple idea. The postal guy, who visits everyday, will knock on the door and ask, “How are you?” and just check and see how they are that day, and give a little bit of social interaction for five or six minutes. If they require things from the community, be it medical or social, the postal guy could then link them back to the right people.

Joe: Yeah, basically every postal system has a big problem; they’re all losing their revenues because of new technologies, such as email and social networking. So they have to find new things to do. It seemed logical that what you would want to do is to utilise this great infrastructure; they’re the only organisation that has the ability to visit every house on a daily basis. The last thing you would want to do is to lose that ability.

MedCrunch:  Very interesting. What is it about the Jersey population that needs this?

Joe: The truth is our population is really no different to any Western Europe population.  We’ve got this tsunami of ageing coming towards us, the health services are saying that they don’t know how they are going to cope, and, at the same time, they are saying they would like to keep people in their homes as long as they can. I think ‘Call & Check’ is part of that jigsaw of solving the problem.

MedCrunch:  So is that actually what inspired the idea directly?

Joe: Exactly that. It just became obvious the more I thought about it. The one thing that would be terrible is for any locality, not just Jersey, to lose its postal service. You would never rebuild a structure like it again. We needed to find ways to use that infrastructure for the good of the community and it just matched up with an aging population. It’s a simple system that could become quite effective for isolated and aging population.

MedCrunch: I understand you have an outcomes framework; what are you looking to achieve?

Joe: I’m looking at the benefits that ‘Call & Check’ would give to the aging population in terms of connecting them back into the community using the resources of the community in a more joined up way. A lot is going to be based on information given by the actual clients themselves: how they found the service; did it connect them to the community more; and did it really have an effect on their health? A lot of the people in the pilot are referred to as “revolving door” patients; they spend quite a lot of time going in and out of hospitals. So the question can regular visits be an effective early warning system to stop things that they eventually end up in the hospital with? There are various criteria that we are trying to measure during the pilot both from a medical and from a social aspect.

MedCrunch:  So what is the plan in terms of monetisation?

Joe: Jersey Post is funding the pilot. Our CEO, Kevin Keen, is an innovator so he said that if we are going to try this we will fund a pilot. Part of the pilot will be building the business case that this is a cost effective service and that the state should pay for it.

MedCrunch: This could then potentially be copied by other postal services internationally, right?

Joe:  Absolutely. In theory, this could work for any postal service. They are all looking for new revenue streams and nearly every country has the same problem of aging populations. It would be illogical to create new services that aren’t connected to the present infrastructure; use your present infrastructure and try to do just sensible things. We’ve sent information about the pilot to over 20 countries.

MedCrunch:  Finally, Joe, tell us a bit about your background?

Joe:  Yes.  I’ve had sort of two existences; one has been in IT field, the other one is in medical research; I’ve done work in cardiac imaging and cancer. I have a quite varied background and worked in the UK and America. We came back to live in Jersey, which is a small island between England and France, and I was asked by the CEO of Jersey Post to come up with new ideas to develop the postal system.

MedCrunch: Thanks, Joe; come back and tell us how the pilot went.

Joe: Will do, and thank you.

This is a great example of Wellth – new, health-related value, based on what people want, supported by their nano networks. Will ‘Call & Check’ work everywhere? No, I suspect not because what underpins the service is the trust that a small island community has in its postal workers. In business terms, it’s the most distributed infrastructure on the island but in personal terms it involves the same people that the island residents might have a drink with on a Friday night. It leverages community.

What also excites me about ‘Call & Check’ is that no one really knows if it’s going to succeed – not the health care system, not Jersey Post, not even the inimitable Joe Dickinson. However, they have the courage to try, to seek new value. Faced with the “tsunami of ageing coming towards us”, as Joe describes it, we need this (as I have described elsewhere).

We’ll be staying abreast of Jersey Post’s pilot and will let you know how it goes in due course.

This interview was conducted by Pritpal S Tamber in collaboration with MedCrunch where it was first published.

11 thoughts on “How a Postal System Can Keep Us Healthy”