How Doctors’ Failures Will Lead to Social Unrest

Reflecting on talks by Pippa Malmgren, an economist, and Des Gorman, the Executive Chair of Health Workforce New Zealand 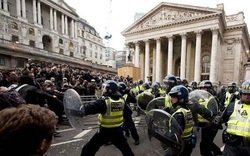 The cost of health care is contributing to the social unrest we’re seeing all around the world and doctors are utterly failing to respond. Those were the two things I learnt last week at the biennial gathering of people working in the health insurance industry, a meeting that I was lucky enough to speak at.

Industrialised nations have a record burden of debt, so much so that if they taxed their citizens 100% of their earnings they’d remain in debt for a decade. So said Pippa Malmgren, an economist and former Special Assistant to the President of the United States for Economic Policy. Given the size of the debt, many countries are deciding to do less through the state (austerity) and print more money (quantitative easing). With more money about, prices are going up but salaries are not following suit and the state is providing less of a safety net. All in all, workers have less economic power and are feeling the squeeze; between 40-70% of their incomes are going on food and energy, leaving little for rainy days and old age.

Being sick is a rainy day and more and more people are struggling to afford the care they need. In the UK people use this as an argument against private provision of care but this is not just about the cost of health insurance and the possibility of co-payments. Even in countries where care is funded through taxation, the economic impact of being sick and not being able to earn is increasingly crippling when you have little in the bank and a shrinking public safety net. Are we really moving to a world where being sick means an immediate slide into poverty, irrespective of how health care is funded?

None of this is a dystopian future, according to Pippa; it’s the here and now. In China, workers are demanding a 70% increase in their salaries year on year, partly because they see the need to save for the future now that they’re living longer. This is a potential spark for anger and social unrest. In response, American firms are taking their operations back home where wage demands are increasingly comparable to what they have to pay in China and social unrest – which would impact production – is less likely. And in response to that, the Chinese government is buying food companies to secure the supply and prices of food in order to minimise the chances of unrest amongst its people – there’s nothing more likely to cause unrest than hunger. 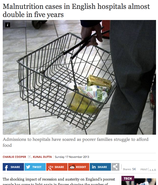 In parallel to all this, the price of food is going up, which means producers are responding by offering cheaper calories. These are inevitably less nutritious, which is impacting on people’s health. Malnutrition is a word people often associate with graphic images on the news from war-torn countries, like Michael Buerk’s famous reporting from Ethiopia when I was growing up. But on the day Pippa spoke she shared an article from The Independent that said that the number of cases of malnutrition in English hospitals had doubled in five years. Let’s be clear: hospitals in England, not some war-torn country.

But what does all this have to do with doctors and why am I saying they’re failing?

Because they’re blind to the macroeconomic picture they operate in, according to Des Gorman, the Executive Chair of Health Workforce New Zealand, part of the Ministry of Health. In his role he worries about the fact that over the next 10 years the demand for care will require 70% more clinicians – and that’s assuming health care remains the same shape as it is today. However, that assumption doesn’t hold water because more and more clinicians demand a better work-life balance, effectively reducing the supply of clinicians, as evidenced by an anaesthesiologist in Melbourne who’d prefer to work as a barista in the city than work in a rural hospital somewhere. Rather than face this problem head-on, Des says clinical ‘leaders’ are blaming individuals rather than understanding that their challenge – and their duty to patients – is to adapt to a changing world.

Des spoke with authority and barely disguised scorn about his – and my – profession. He described how the current response to the “productivity gap”, as he called it, was “intense management” mixed with deference to clinical freedom, and yet little of it was yielding the kind of results that the workforce crisis demands. He described doctors as being “arrogant” for believing that they implicitly have leadership skills, even though in his career as an officer in the Australian Navy leadership was something that was proactively taught and continually assessed. He described the 30% of waste in clinical practice (over-treatment and the introduction of questionable technology) as a “failure in clinician leadership”.

To walk the talk, Des and his team are devising processes to predict the demand for care, including being able to handle uncertainty. One example of uncertainty in workforce planning was the discovery of Helicobacter Pylori that turned gastric ulcers into an infectious disease problem, rather than a surgical one, effectively drastically reducing the demand for surgeons. In his work, Des creates ten possible futures and then sees how their plans satisfy each of them. He accepts that he’ll never be able to plan a workforce to meet all ten futures but he hopes to meet as many of them as possible – and they repeat the process every single year. He talked of the need for more generalists to be able to flex to changing demands for care – the very opposite of what is happening in postgraduate training.

In all honesty, I’ve never understood why health care doesn’t do this kind of planning. We seem to fit care around the number of clinicians and hospitals we have rather than ask ourselves whether a clinician-intensive, place-based form of health care is either right or sustainable. And I have to admit that I completely share Des’ disappointment in the profession’s incremental and self-serving response of ‘quality improvement’, a movement that seems to operate in ostrich-like oblivion to Pippa’s macroeconomic view, a view that manifests in people’s everyday choices and decisions.

My talk was about the three lies we tell ourselves in health care. We lie by calling it ‘health care’ when it’s really ‘sick care’; few of us really understand what it means to care for health. We lie by telling ourselves that we can carry on as we are by finding ‘efficiencies’; it’s pretty clear that we can’t, especially when you look at the widening health gap. And we lie by saying that ‘creating health’ is too nebulous a concept to invest in, even though there are more and more examples of local communities improving their health without relying on the health care professions and industry.

I left the event all the more convinced that doctors were not the future of health. They do, however, have an important role in listening to the Pippas of this world, reflecting on their abject failure, and, like Des, coming to the table, with humility, to truly address the ever-rising demand for care – preferably before we see the first “health care riots”.

At Wellthcare, we’re building that table – but more on that another time.

Wellthcare is being fuelled by Guy’s and St Thomas’ Charity, a catalyst for innovation in health. To learn more about the relationship between Wellthcare and the Charity see the announcement.

4 thoughts on “How Doctors’ Failures Will Lead to Social Unrest”