It Takes Time, Money And Beer

Perhaps the hardest thing to do in health care is provide a safe environment for new ideas to be tested. While safety and ethical concerns are often well-placed, they can stifle creative thinking. The desire for ‘evidence’ can also create pressure to get things right quickly, often on the first time of asking – an almost impossible task in the fluid and iterative world of trial-and-error that is at the heart of innovation.

The Rainbow Group in Amsterdam has honed an approach to try out radical new ideas to tackle some of the toughest social challenges facing the city. About 80% of them eventually shift into mainstream services. I was lucky enough to speak to its Director, Hans Wijnands, about their approach but we started by discussing their internationally-renowned project, described in the New York Times, to pay alcoholics with beer.

Hans Wijnands: It’s not the beer that makes the difference, it’s the approach. We say to the alcoholics that we are going to look at them as normal human beings but with a serious problem. We make them a part of a group, ostensibly for street cleaning, but that gives them structure to their lives. It gives them the possibility to develop an alternative perspective on their lives and show their better side. It also gives the neighbourhood the opportunity to see that they can tribute to society. The beer is just a mechanism to keep them engaged because without it they can’t focus.

PST: Creating ‘life structure’ as an intervention; interesting idea. How did you come up with this?

HW: There was a similar initiative in Canada. They were giving red wine to alcoholics as an alternative to the incredibly strong spirits they were dying from. It made me wonder if we should try something similar, especially for those in whom interventions have failed. That’s who we work with: the over 50 in whom standard interventions have failed. But, again, it’s not the alcohol that matters, it’s the structure. We give them street cleaning work for three days a week and provide them a beer each hour. After a couple of months they’re drinking less, not just during the work days but the whole week. We think the three working days give them a sense of the contribution they can make to society. They no longer feel outcast. So they take the structure of the three days and apply it the rest of their week.

PST: And I understand you go beyond the alcoholism.

HW: Yes, they also get healthy meals when they are with us and we help them solve their wider social challenges, such as their finances. We don’t manage their debts, as such, but we coach them to think about how they spend their money, including balancing the need for weekly groceries with larger, more expensive items. It takes a while for them to be open to receiving this kind of help; they’re often in the project for several months first. When they first come, or are drunk on the streets, they don’t want any help. But we know that helping them to solve these issues is as much part of their treatment as anything else.

PST: How do you know the approach works? 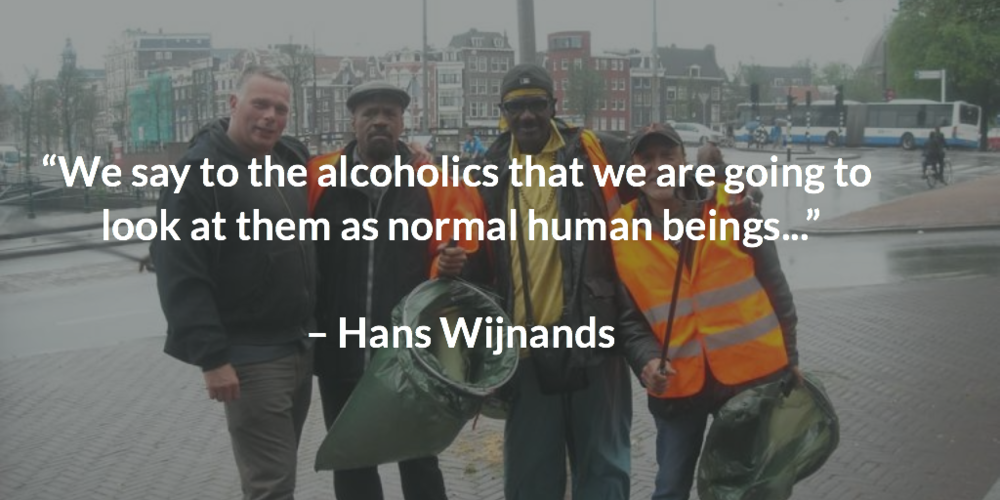 HW: From the individuals’ perspective, it works because you can see them starting to work on their problems. They may not have solved their problems but the fact that they’re trying is important. We also see that they have fewer problems with the police or housing department. From the authorities’ perspective, it works because they’re dealing with fewer disturbances in the neighbourhood, it is more quiet. The local people are happy because the parks, where the alcoholics used to hang out, become nicer, the kids and parents feel safer. Some locals don’t like that we pay the alcoholics with beer but they accept it when they see the benefits in the neighbourhood.

PST: So how is the Rainbow Group funded?

HW: We are funded 80% by the municipality of Amsterdam, 10% through private donors and 10% through our own revenue. This finance mix is crucial; it gives us the opportunity to try out new ideas – such as paying alcoholics with alcohol – that would be too politically sensitive with public money. Our annual revenue is €10m (£7.2m/US$11m). We use it carefully to try out radical new approaches while navigating the sensitivities that often inhibit innovation in health. We’ve been going for a few years now and because we’ve had many successes the municipality continue to support and fund us, which means we get a runway to let projects establish and evolve before we start having to think about making the case to move them into mainstream funding.

PST: So this 80-20 split in funding is key to how you incubate new ideas; fascinating. Have you ever failed?

HW: Yes. Of course. About 10-20% of our projects ‘fail’. Some of them were just bad ideas or were okay ideas that were not implemented in the right way. Those we stop. Others, though, ‘fail’ only because the mainstream cannot adopt them, usually due to political sensitivities. However, they ‘work’ so we often keep doing them ourselves. They’re either paid for by private donors or we charge for them – that’s partly where some of the 10% revenue that I mentioned comes from. Yes, we fail; you have to try things, often controversial things, so you can not always be successful.

PST: The Rainbow Group focuses on some of the toughest problems in society. It’s clearly hard work. What advice do you have for others wanting to do this kind of work?

HW: What’s most important is to listen to the people you’re trying to help. What are the problems they are facing right now; how can you think with them to find solutions. It is important to think out of the box and in terms of what’s possible now, rather than just focus on the problems. And sometimes it’s good to take risks. If you show to your funder that you take some risks, dare to try things, and are prepared to work with other organisations, you win their trust and, over time, that gives you new possibilities.

PST: That’s an invaluable piece of advice. Thank you so much for your time, Hans.

HW: Thank you for the interview. If there are any other questions I am always willing to answer them, or maybe think together on how to solve a tough social problem.

There has been much focus on The Rainbow Group’s pay-alcoholics-with-beer project but, for me, the real story is how their mixed funding model has enabled them to fund a project that would be too sensitive with public money alone. The Group has obviously built up a reputation for success, which fuels their year-on-year funding, but with that has come the ability to try radical new approaches across some of the toughest social challenges facing Amsterdam. It’s a social innovation sandpit that has much to be admired.