In this post, Jeanne Ayers of the Minnesota Department of Health describes her journey from frustrated public health practitioner to establishing the Triple Aim of Health Equity

People often say that systems need to shift from doing to communities to doing with them. But how does such well-meaning rhetoric manifest as an approach. I was lucky enough to speak with Jeanne Ayers, the Chief Health Equity Strategist and Assistant Commissioner of the Minnesota Department of Health, on how she and her colleagues have done just that – and how it took over 10 years to work it out.

Pritpal S Tamber: Hi Jeanne. So, tell me why you were so frustrated as a public health practitioner.

Jeanne Ayers: I spent my life believing I was making a contribution to ‘assure the conditions in which (all) people could be healthy’ only to discover I shared responsibility for a system of policies that pick health winners and health losers. The health losers were consistently people of color and American Indians, and their numbers were growing. Persistent health disparities served as a clear indictment of our approaches. It seemed to me we needed to go further, to build the capacity to influence power, social policies, and politics.

Pritpal: Is ‘capacity’ the same as ‘agency’, the ability to make purposeful choices?

Jeanne: Sort of. The understanding of ‘agency’ I operate from emphasizes collective action or civic agency, not individual choice. Since the social determinants of health are shaped by a set of forces beyond the control of the individual, we must build our collective capacity to act, our collective power. As Martin Luther King Jr said, “Power, properly understood, is the ability to achieve purpose.” I believe that to achieve our public health mission we need to intentionally expand our collective power to effectively address social and racial inequities.

Pritpal: Fascinating. So, they’re similar but you take it further, to the collective being able to act. Ok, understand. So, what did you do with all of the frustration?

Jeanne: I began inviting public health leaders to my home. We had our first meeting March 4th 2004 so we could name our group, “March Forth!”. Together we focused on the growing threats represented in health disparities and our persistent failure to enact public policy that supported public health goals and investments. We recognized we needed to build public understanding and public commitment in order to build the political will for the changes needed in policies and systems to impact health equity.

Pritpal: Love the name. So, what did the ‘March Forth!’ folks do?

Jeanne: As public health professionals, we didn’t know how to build political will. We considered re-branding public health, offering expert testimony, and holding conferences. But the one thing we did not discuss was ‘power’. I then joined ISAIAH, a faith-based community-organizing group working on social, racial, and economic justice. There, I learned about power the hard way. I wanted to ‘educate’ them as a public health person but they were not responsive. It was only when I demonstrated an ability to lead, build a team, and bring people to meetings did they see that I had the potential effect organizational change. It was then they started to listen.

Pritpal: Gosh. They sound like a tough crowd. So, you were bringing together public health knowledge and community-organizing skills, and then found yourself in the Minnesota Department of Health. Were you able to apply what you learnt in your new work environment? 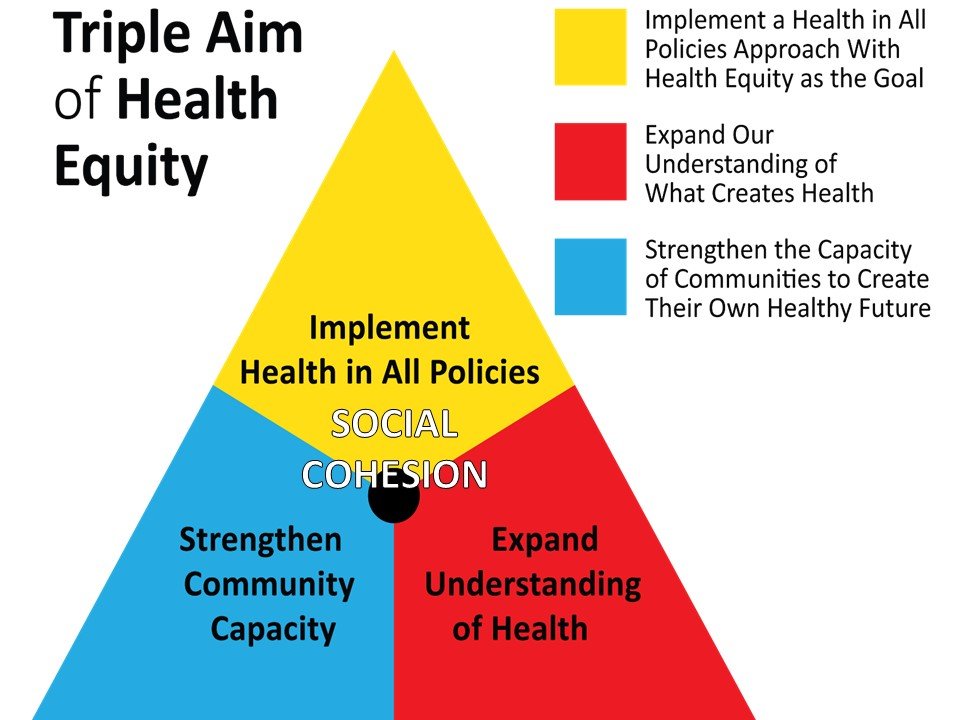 Triple Aim of Health Equity (see below for an explanation)

Jeanne: Absolutely! The first month I planned to attend a meeting with a community group on housing and zoning issues. I met a colleague in the corridor and he counseled me that housing was not in our “swim lane”, and that we had to be cautious about meeting with community groups because they have “an agenda”. Then he went into a meeting with health insurers, our so-called “stakeholders”. It made me realize that we needed to find a way to ‘re-set the table’, to create a different, broader narrative of health that made it possible for community groups to be a natural part of the discussion.

Pritpal: ‘Re-set the table’. That’s a great phrase. So, give me an example of how the broader narrative of health and re-set table was able to influence a state-level decision.

Jeanne: The broader narrative meant that we were able to establish an expanded set of ‘stakeholders’ in what we called our ‘Healthy Minnesota Partnership’. The Partnership broadened how we did our statewide health assessment to include indicators such as income, education, transportation, incarceration, and housing. The partners then organized legislators to direct the Health Department to write a white paper on income and health (see PDF). Advocates then used the report to expand the debate on minimum wage to include health considerations. Shifting the debate to include health meant that a wider set of stakeholders got engaged. They successfully increased the state minimum wage in 2014.

Pritpal: That’s pretty amazing and looks to have required some serious purpose and patience. I know you have many more examples to share but have you established an overall approach?

Jeanne: Yes, since our health is almost completely connected to our living conditions and our living conditions are determined by our ‘capacity to act’, or power, we employ an approach that blends power and systems change. It includes three simple practices we call the Triple Aim of Health Equity (see image):

Pritpal: They may be simple to list but it’s clear that making them happen takes dedication and a willingness to respond to events on the ground. I’m really pleased that you’ll be sharing your experience at our May symposium, Community Agency & Health. Thank you for doing that.

Jeanne: I look forward to learning from new colleagues at the symposium. Geoffrey Vickers, an early systems practitioner, defined public health as “the constant redefinition of the unacceptable”. I believe that collectively we can build our power to address unacceptable structural and racial inequities, and assure the opportunity for health is available to all.

Two things really strike me about Jeanne. The first is her tenacity. It must have taken a lot to keep going, both when it was clear that public health was not working and when she was not being listened to at ISAIAH. The second is the lucidity with which she has packaged her experience into an approach that others can learn from. Both are marks of a true innovator.

Jeanne will be leading a breakout with Doran Schrantz, the Executive Director of ISAIAH, called ‘Navigating Power in Health and Community Partnerships’. The symposium is May 15-16 in Oakland, CA. You can get your tickets from Eventbrite.