Announcing the second version of our implementation tool, including some photographs of the previous version in use and how that informed the new version

We’ve updated our implementation tool (see PDF). The first version was published May 2017 and in using it we felt the design was a little too cluttered, which made it hard to use. The new tool has cleaner, more refreshing feel to it, something that we think is needed for the hard work it asks users to do. In updating the tool, we also gave it a title to say what it is for – bringing purpose to community engagement.

When we created the first version of the tool we were taking a punt on how it might be used. We didn’t know for sure. All we knew was that some people in health care agreed that agency – the ability to make purposeful choices – matters to health, they liked the structure of the 12 Principles, and they wanted to know how they can implement them into their work.

To respond we took each principle and underneath it wrote a ‘continuum’ – a series of statements that start by acknowledging the importance of the principle and then become more aligned as you read from left to right. Under the continuum, there is a series of prompt questions to help you deepen your alignment to the principle.

Since publishing the first version of the tool, we’ve run a few workshops including one at the 2017 annual meeting of the American Public Health Association, one at the 2017 meeting of the National Center for Complex Health and Social Needs, and one at the 2018 Poverty and Health Congress. By doing that and collecting feedback we got a sense of how the tool needed to change.

The new version includes a page on how to use it. One of the things we had to make clear was that you do not have to engage with every principle, nor do you have to approach them in order. The principles inter-relate so working on one means, to some extent, working on some of the others simultaneously, so the idea is to start on the ones that resonate with a current community health initiative. 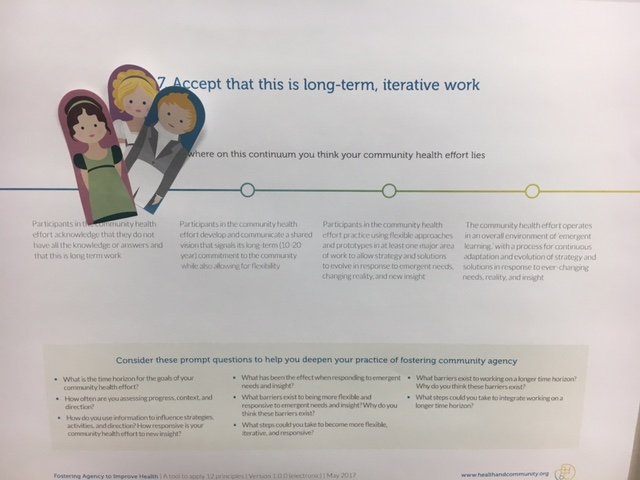 Photograph 1 : Stickers being used by team members to indicate alignment with Principle 7, ‘Accept that this is long-term, iterative work’

We’ve also included a step-by-step illustration of how to use the tool (see page 3 of the PDF) with some diagrams of the tool in use. These diagrams were very much informed by some photographs that we were sent by Dunia Faulx of Jefferson Healthcare in Washington State. Dunia and her colleagues used the tool to inform their social isolation strategy.

In Photograph 1 you can see how Dunia and two of her colleagues used stickers to indicate how aligned they were with Principle 7, ‘Accept that this is long-term, iterative work’. Their stickers are to the left of the continuum, which indicates that they acknowledge that the principle matters but they’re not yet working in a way that is aligned to it. 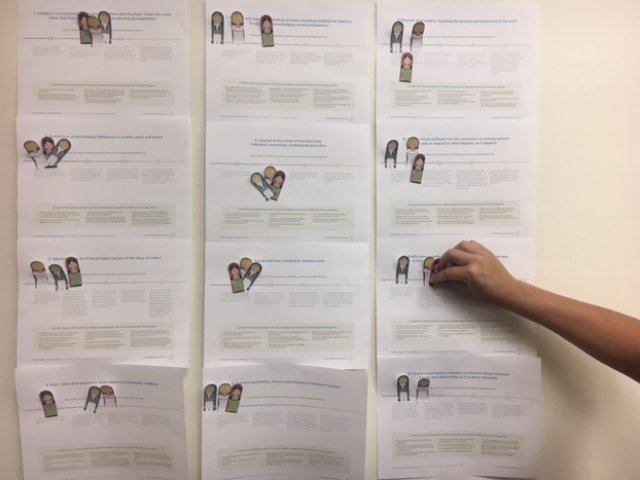 Photograph 2 : Stickers being placed across all of the Principles

Photograph 2 shows each page of the tool – one for each principle – on the wall with one of the team placing her sticker on Principle 11. Across the principles, you can see that the team is generally aligned in their view of their work but there are clear differences in Principle 4 (see bottom of the first column), Principle 5 (top of second column), and seemingly Principle 11 (where the sticker is being placed).

These differences are what the team need to talk about. Principle 4 is about eliciting, valuing and responding to what matters to community residents. While two of the team believe community residents are providing input to inform the community health effort, one – the one that placed the sticker to the very left – thinks residents are only being informed, not getting the opportunity to provide input. That difference in opinion is clearly something to discuss. 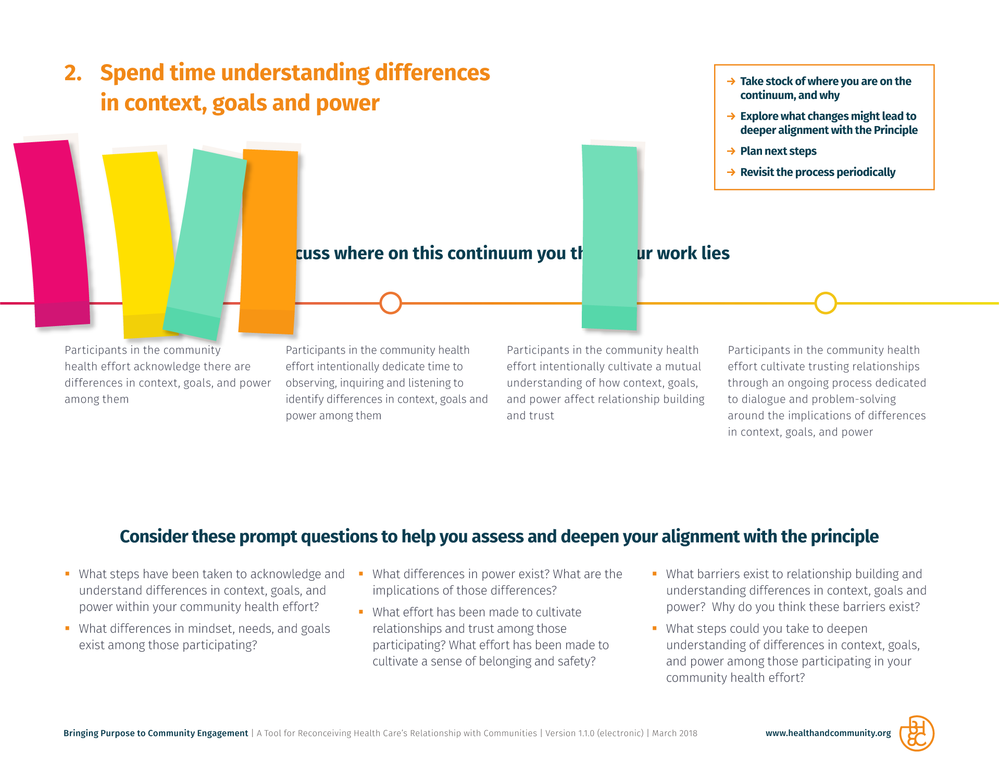 Figure 1 (a diagram from the tool): Four people use colored post-its to indicate their alignment with Principle 2

As I mentioned, these photographs informed the diagrams we used in the step-by-step illustration that we included in the new version of the tool. In the first diagram – included here as Figure 1 – there are four people using the tool, each with their own color: pink, yellow, green and orange. The green sticker has been placed twice, which represents something we’ve seen in workshops – sometimes someone thinks their work resides in two places on the continuum. This is highly plausible. Going back to Principle 4, the statement to the very right of the continuum says that residents have a direct role and an equal voice in community health work but it may be that they only have one of the two. 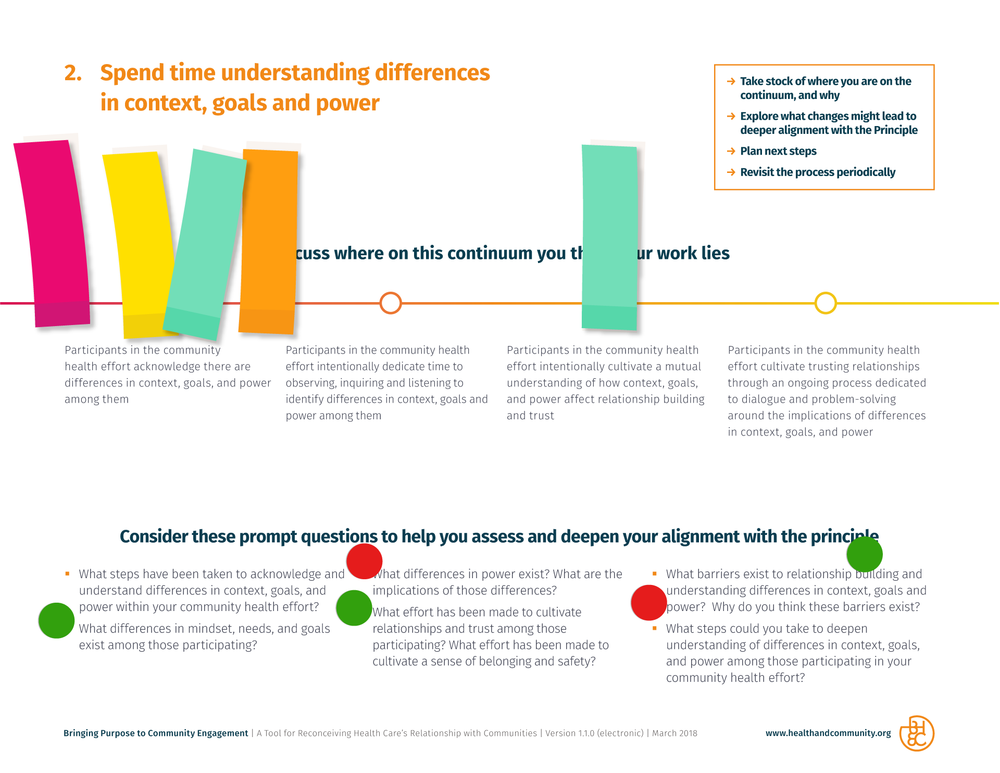 The second diagram from the step-by-step illustration – included here as Figure 2 – is the same as the previous one except that there are now green and red dots amongst the prompt questions. We’ve found that workshop participants felt there were some questions they could ask colleagues (green), whereas others they’d stay away from (red). We thought it important to help them mark which questions they might be able to ask and also encouraged them to be specific about how they’d go about asking – who they’d ask, at which meeting and as part of what workstream, for instance.

Although we don’t track downloads, we know the tool is being used so we’re keen to understand whether it led to any changes. It’s clear to us that health care has to embrace a new way of working that helps – not hinders – communities to either find their voice or be heard. Our tool is an attempt to make that happen and we’d like to understand whether it does and what else we need to do.

2 thoughts on “Our New Implementation Tool”

See other articles in this/these project(s): A Practice-Based Framework for Working with Communities
NEWSLETTER
NEWSLETTER
Scroll to Top