The last few weeks have been exceedingly busy as we finalised the Wellthcare Manifesto, interviewed more Wellth Creators, and started work on what a meeting on ‘health creation’ might look like. One question has surfaced a few times and I wanted to reflect on it here: “How is Wellthcare different to public health?”

Public health, according to Wikipedia, is:

the science and art of preventing disease, prolonging life and promoting health through the organised efforts and informed choices of society, organisations, public and private, communities and individuals

It sounds awesome but my experience of it – as a citizen and an observer of health and health care – is that when it comes to lifestyle diseases it’s heavy on the ‘what needs doing’ and very light on the ‘how’. Without knowing the ‘how’ the ‘what’ becomes almost pointless or – when it’s constantly reiterated – runs the risk of being a form of pernicious moralising. 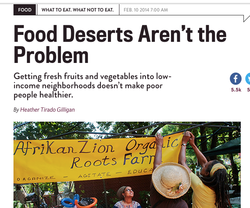 I see examples of this moralising all the time but my favourite one in the past week was reported in Slate. In San Francisco’s Bay Area a group of ex-convicts are being taught about fruit and vegetable in the belief that the knowledge will help them make better decisions about their diet. The article makes the point that the belief is not matched by the evidence and cites a number of studies that illustrate no connection between access to grocery stores and more health-creating diets.

The article goes on to describe how it’s the actual stress of poverty that contributes to why low-income people die earlier, not the bad health choices they make. They are, it says,  “preoccupied with very different choices than wealthier people are: Should I pay my electricity or my water bill? Can I pay my rent and buy my kid a pair of school shoes?” Against such stark choices I ask myself how a public health message on what fennel is even matters.

Is that to say, then, that the insights of public health have no role to play in low-income communities? No, of course not. But there is something about which insights are delivered, and how, that is, in my view, simply failing. 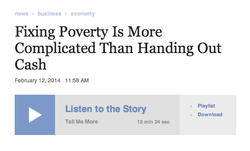 Two days after the Slate article there was an NPR broadcast on how fixing poverty was more complicated than handing out cash. In it, Mauricio Lim Miller, the founder and CEO of the Family Independence Initiative, talked about how he helps people pull themselves out of poverty by trusting them to make their own decisions. His organisation gathers families wanting to change their circumstances, asks them what they’d do, encourages them to do it, and then shares their stories with the other families in the programme. By sharing what worked and what didn’t work, the families learn from each other.

It’s important to note that Miller asks the families in the programme: “what would you do to change your own life ’cause you’re not going to get help from us?” He describes his Initiative as being in the information-sharing business, enabling families to share experiences and learn from each other, not in the giving-people-stuff business. And it’s important to note that the information being shared is created through the experiences of the families involved, not some central organisation.

This example makes me reflect on the tactical part of the definition of public health above: “organised efforts and informed choices”.

Now that lifestyle-related chronic conditions are huge concerns for many middle- and high-income countries, surely the people who should be in charge of the “organised efforts” are those that truly understand the lifestyles involved? Can a public health professional really understand the plurality of behaviours that make up the numerous and overlapping lifestyles that exist in modern communities? It seems unlikely. Surely, then, our greatest resource, as Miller has realised, is the people themselves.

Also, as a former academic editor and publisher, I am obsessed with the power of information and hence the term “informed choices”. We all know that people tailor information to suit their needs, whether it be a child trying to explain how his kicking a football at the window was not directly related to the broken glass (my Mum somehow never saw it that way) or a government claiming economic recovery based on debatable employment statistics. My question, then, is who decides if a choice is “informed”?

A choice can be described as informed when it is made in context. But is it really possible to understand context through cold, nuance-ignoring epidemiological analysis? Can number-crunching at a population level really create an understanding of the lives that people lead and the choices they have to make? Going back to the low-income people above, does an epidemiologically-informed choice even matter?

It’s hard to see how.

So, if the “informed choices” don’t matter and the “organised efforts” are formulated without any real understanding of the lifestyles involved, what use, then, is public health in lifestyle-related diseases? If the answer is ‘not much’, then surely the broken record of public health messaging crossed into pernicious moralising some time ago.

At Wellthcare we start from what people want to do with their lives. We’re well aware that we’re yet to ‘do’ anything, as such, but our contention is that if we’re to find new forms of value in health we have to start from a radically different way of seeing people, their behaviours, networks and communities. We have to understand what they want and not be slave to what we think we know from our spreadsheets. That’s how Wellthcare differs to public health.

We’d love to hear your thoughts.

This post was first published in MedCrunch and then in MedCity News. Wellthcare is being fuelled by Guy’s and St Thomas’ Charity, a catalyst for innovation in health. It . To learn more about the relationship between Wellthcare and the Charity see the announcement.
[molongui_author_box]