Being Well by Believing We Can

Guy’s and St Thomas’ Charity sought to test the hypothesis that a solution to the health challenges facing Lambeth and Southwark is to take a community-led approach grounded in the needs of individuals and the communities in which they live. The hypothesised solution was alternatively described as ‘increasing individual agency’ and the programme that may result from this hypothesis was called ‘Being Well’.

Pritpal S Tamber and Elizabeth Slade delivered this work on the basis that existing community-led programmes would yield experiential knowledge and observational knowledge. We recruited eight Formal Advisors with a blend of both.

We aggregated the Advisors’ experiential knowledge into 19 key themes and sought their recommendations for key articles and how to search PubMed.

The Formal Advisors recommended 25 articles. Our searches of PubMed yielded 1112 articles, of which we deemed 174 to be relevant. Given the time available, we read 103 articles; the 25 recommended plus the first 78 of the articles from PubMed ranked by their Source Normalised Impact per Paper (SNIP) score.

From the articles we learnt that what matters is whether people believe they have agency rather than whether they objectively do and that there are significant problems with the definition and measurement of ‘well being’. We also learnt that agency doesn’t so much create well being as be part of it.

Our responses to the rationale in the invitation to tender are:

Building on our responses we propose the rationale be:

In light of our rationale we propose the objective of the programme that may result from this work to be:

We suggest the working title be ‘We Can’ rather than ‘Being Well’ and propose eight design principles:

These design principles have informed our proposed approach. At the heart of the approach is the ‘hub’. It is an organisation, separate to the Charity, with staff to coordinate between the Charity, local projects, and all parts of a community. We propose that the Charity works with multiple communities at the same time, meaning that there will be multiple hubs.

As costing the next steps will depend on the Charity’s decisions with respect to speed and scale, we have not attempted this. 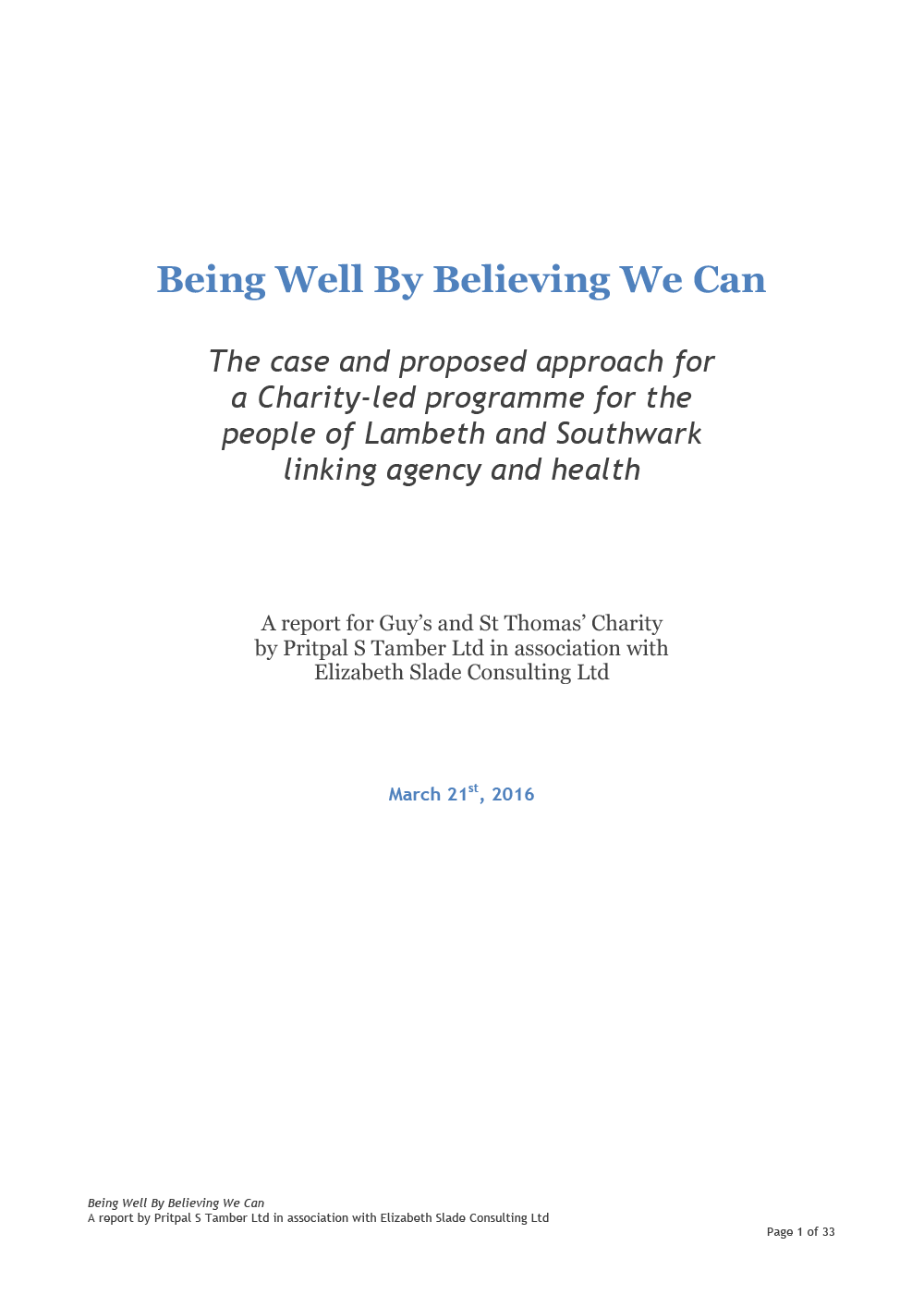 In this work, we harnessed and examined experiential and academic knowledge linking agency and health. We blended what we learnt into a critique of the foundation’s idea of approaching community health through the lens of well-being and agency (rather than bio-medical measures). We also proposed an approach for the foundation to test a refined version of its ideas in the real world.

Project this report was part of: Being Well By Believing We Can