Seeing Beyond the Bio-Medical Model 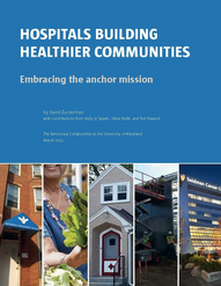 In over a year of exploring what it takes to create health through communities few articles have better summarised the challenge and the possibilities better than Jamie Harvie’s Foreword to the Democracy Collaborative’s report Hospitals Building Healthier Communities by David Zuckerman published March 2013.

It’s with great pleasure that I am sharing it with you today.

For us, the fundamental challenge is to stop seeing health solely through the bio-medical model. This model sees people only as pathology and does not take into account the role of social factors or individual subjectivity. Jamie describes this perfectly but also provides some hope by weaving together “collective signals”, as he calls them, that keep reminding us that we need to include community as an equal partner. His text focusses on the US.

Jamie is the Executive Director of the Institute for a Sustainable Future, a founding organisation of the Commons Health Network, an organisation that looks to support systems that promote individual, community, and ecological health while recognising that ultimately, health is local.

We hope you enjoy Jamie’s article as much as we did – and do.

The British Medical Journal recently declared climate change the biggest public health threat of the 21st century. In the United States, the Centers for Disease Control and Prevention has called obesity our nation’s largest public health threat. In the midst of these pronouncements, the current economic crisis and associated deliberations over the merits of the Affordable Care Act have also provided a deepened awareness about healthcare’s impact on the overall economic health of our nation.

At the heart of this conversation is a debate over the role of public health and prevention, and to what degree the bio-medical model should predominate. This model, which has shaped “modern” medicine, has been around since the mid-19th century, and has as its focus the physical processes of disease; as a result, it overlooks issues such as social and environmental factors or belief systems.

Studies indicate that behavior and environment account for roughly 70 percent of our health outcomes, and medical care only about 10 percent. Yet, 96 percent of our national health expenditures are focused on medical care, with only four percent dedicated to prevention. On one hand, these findings highlight the irony of the hospital as anchor institution model itself. That is, that we are asking healthcare institutions to “invest” their economic power in health. But, on the other hand, this data provides an important framework and a necessary pathway forward to ask ourselves, “What is healthcare for?”

Historically, clinical medicine and public health have been detached from one another. As physician Ted Schettler aptly describes in his paper, Toward an Ecological View of Health: An Imperative for the Twenty-First Century, each of these health spheres bring their own sense of ethics, bases for intervention, and time scale, and each has competed for attention and limited financial resources. The bio-medical model has been largely dependent on a set of products and services that reinforce its economic influence. As we read the following report, it is important to understand these historical dimensions.

Though clinical medicine and public health have some of the same interests at heart, the economics of the healthcare sector ironically puts them in competition with one another for a limited supply of power and influence—often to the detriment of health outcomes.

It has become clear that health disparities and social determinants of health are key drivers of chronic disease and health impacts; we must think beyond a bio-medical model to include meaningful primary prevention strategies if we are interested in resolving the healthcare crisis. As Dr Schettler has highlighted, “the healthcare sector could make an important contribution…by re-examining its social contract with society and asking whether twentieth-century assumptions, programs, and services are adequate and appropriate for the twenty-first century.” The most at-risk populations are those without access to affordable food, safe housing, personal safety, and a clean environment. These same individuals lack a collective economic voice, and their needs will have to be met in our evolving healthcare model.

Clearly, as a nation and a planet, we are now engaged in conversations about how to not only bridge but weave together the silos of health, power, and influence in the broader health sector. Provisions of the Affordable Care Act work to integrate disease treatment with public health and prevention, though it is still too soon to see how successful its implementation will be for improving the health of the country. Recently, the Institute of Medicine held a landmark summit, titled, “Integrative Medicine and the Health of the Public,” to explore integrative approaches to health. And, as David Zuckerman describes in this timely and astute report, a variety of hospital leaders are “beginning to adopt an anchor-institution strategy that utilizes not-for-profit hospitals’ long-term, place-based economic power to improve the long-term welfare of their communities.” The nascent concept of health beginning outside of hospital walls is starting to take some form. This is why the anchor institution model holds such promise. Because if done correctly, it can redistribute economic power to support greater health equity and reinforce the foundational understanding that health is built in community.

The Institute for Healthcare Improvement (IHI), a leading organization working to improve health and healthcare, believes that new designs can and must be developed to simultaneously accomplish three critical objectives: 1) Improve the health of the population; 2) Enhance the patient experience of care (including quality, access, and reliability); and 3) Reduce, or at least control, the per capita cost of care. This approach (which is called “Triple Aim”) melds the population health model with the bio-medical model. To be successful in this goal, Donald Berwick, M.D., then Medicare/Medicaid administrator and IHI’s president and CEO, outlined a seven-step process based on successful healthcare models from across the country.

Berwick’s approach is informed by the work of the late Nobel Prize-winning economist Elinor Ostrom. Her research showed how regular people have been able to develop rules and institutions to successfully manage shared resources, such as water rights, grazing rights and fisheries—all central to the health of populations. What Berwick has argued is that communities need to define their healthcare commons, the collective resources that can treat disease and promote health, and to develop community-based strategies. These can include medical technologies but also healthy food environments, housing, liveable jobs, parks, and so forth. He further argued that ultimately it is communities themselves that are going to need to take responsibility to define their “healthcare commons,” set goals, develop metrics, and establish a healthcare solution, which includes but is not limited to the traditional healthcare system.

As we move into a new century with large urban population pressures and a host of ecological health pressures, the answer to “What is healthcare for?” becomes even more important. And this question is not unique to the United States. The National Health System in England published a Route Map for Sustainable Health, which explicitly supports the need for a paradigm shift. It advocates for the transfer from the institution-led paradigm, to a community-led one that accounts for the future of society and the environment, and is informed by partnerships with patients and communities in a more open decision-making system. In Shaping Cities for Health, University College, London and the Lancet Commission advocate a similar place-based, community-driven approach. These collective signals keep flashing and reminding us that we need to include community as an equal partner and recognize that the need to address disparities can only occur through a reallocation of resources. Moreover, they strongly suggest that healthcare begins in community, not in traditional hospitals.

As we read Zuckerman’s landmark report, we can appreciate the power and possibility within a hospital anchor institution model. We can learn important lessons from those leading the effort, and share on how creativity can support models of health promotion, which promise to move us beyond the decaying economic model at present. Their leadership and foresight in addressing key drivers of poor health should be embraced and celebrated. It is also important to remember that we are in a time of transformation; the economic power and influence of the 20th-century hospital must shift, so that we can extend health outside of hospital walls, for the benefit of all. So let us embrace the collective wisdom of these leaders and communities, in a “commons-health” partnership. And, if we are successful, we will have not only hospitals as strong economic anchors, but equally strong community partners woven together in a resilient web.

We hope you agree that it’s a compelling piece.

We’d like to thank both Jamie Harvie and the Democracy Collaborative for letting us republish the Foreword to their report, Hospitals Building Healthier Communities, a report that makes the compelling case for hospitals to use their economic power to contribute to community wealth building.

The Democracy Collaborative advances a new understanding of democracy for the 21st century and promotes strategies and innovations in community development that enhance democratic life. Its Community Wealth work brings together information about the steady build-up of innovative community wealth building strategies throughout the United States.

Wellthcare is being fuelled by Guy’s and St Thomas’ Charity, a catalyst for innovation in health. To learn more about the relationship between Wellthcare and the Charity see the announcement.

This post was first co-published on Wellthcare and MedCity News.