Solving Through Relationships, Not Transaction

More and more community-based organisations (CBOs) are finding themselves useful to health care. Their ability to reach into communities, way beyond health care’s reach, is proving valuable to payers and providers keen to influence social contexts as a way to improve outcomes and reduce costs.

In turn, some community-based organisations are proactively exploring their relationship with health care, conscious of the amount of money flowing through the sector. But they run the risk of becoming defined by health care’s needs, diluting, if not damaging, what made them valuable in the first place – their credibility with communities.

Chris Dabbs: The organisation started as six people on a street corner in one neighbourhood in Salford, northern England. The mortality rate was twice the national average, but there had never been a permanent primary health care presence. The six formed ‘Community Health Action Partnership’ (CHAP) in 2002 to improve both health and health care through social action by local people. Its strength was its ability to engage local people and communities that mainstream agencies struggled to engage. CHAP became Unlimited Potential, a social enterprise, in 2009.

Pritpal: As I understand it, you have quite a unique approach to working with people in systems, such as health care.

Chris: Yes. The traditional approach is for agencies, such as health care, to assess the needs of local people, and then seek to meet them by providing services. At Unlimited Potential, our approach includes asking the agencies what their most difficult or even apparently insoluble problems are. We then work alongside local people to create new solutions to solve the problems by drawing on their strengths and expertise. We have seen that 80% of any solution already lies with the people who have traditionally been seen as ‘the problem’.

Pritpal: So, give me some examples of the kinds of solutions you’ve proposed that have since been taken up by systems?

Chris: Sure. Some years ago, the local health service contacted us because many people in the lowest income neighbourhoods with symptoms of cancer were not coming to primary care until very late. All of the standard approaches led by professionals had been used, without effect, meaning poor outcomes for people and high costs for health care. With local people, we developed a series of games, led by volunteers in community settings, which shared a simple message. As a result, early diagnoses of cancer increased significantly.

Pritpal: That’s a nice health care example. Do you have one that’s more broadly health?

Chris: Yes. We were aware that the life chances of many children in our city were poor. With impending cuts in services, we looked for ‘assets’ in the children’s’ lives that were being ‘underused’. The children showed us that their greatest underused asset was fathers. By starting with what was important to dads in disadvantaged communities, and supporting them to develop and lead their own solutions, Dadly Does It explored and demonstrated the effect of positive fatherhood on the health and well-being of children.

Chris: While these examples are in communities, we have had similar effects in hospitals, such as working with young adults to improve attendance in a specialist renal clinic.

Pritpal: Great stuff. So, does this mean that you’re getting commissioned to propose solutions all the time?

Chris: At Unlimited Potential, we avoid traditional commissioning relationships, as they tend to assume what the solution to a problem is. Also, we do not want to have a transactional relationship with a commissioner – ‘we will pay you to do X, set targets, and hold you to account for what you achieve’. This restricts creativity in thinking about what the solutions might be and prevents working with local people and communities. It can produce functional approaches that often do not relate to people’s real lives.

Pritpal: OK, so how do you go about working with commissioners?

Chris: We aim for a relationship-based approach. The first thing that I want to know from a commissioner is what they perceive their difficult problem to be. The second is what type of working relationship they want with Unlimited Potential. If we can create a two-way relationship, not one based on a transaction, the commissioner invests themselves, not just their money. We can then be open about both what works and what does not, learning together about solutions. We encourage a relationship that enables development so that the commissioner ‘buys in’ to a solution, which is also a better place from which to spread it.

Pritpal: Interesting. So, have you ever been involved in work that did not have this relationship-based approach at its heart?

Chris: In our early days, yes. We were sometimes given a specification, with targets and key performance indicators. It led to a service delivery mindset, with everyone working to the targets, and their creativity restricted. This approach may have its place when there is a clearly proven solution to a problem, which requires only good management and continuous improvement. It usually fails, however, to accommodate the messy reality of people’s lives or encourage their ability to take responsibility and use their own talents to manage or care for themselves.

Pritpal: Do you think your approach means that you do things that other community-based organisations cannot?

Chris: Our approach often enables us to have the space to engage in really hard conversations. For instance, we are leading on a project that focuses on co-production with people with lived experience of severe and multiple disadvantage. The biggest ‘elephant in the room’ is power; citizens often feel they don’t have any and professionals either do not think about it or shy away from talking about it. With space to engage in a discussion about power, new and effective solutions emerge, ones that, from the system’s point of view, are highly cost-effective.

Pritpal: Give me an example.

Chris: Through the project we learned that, if you’re homeless, it’s almost impossible to register for a service because you don’t have an address. Without access to services, problems often get worse. People can actually use their birth certificates if they don’t have a permanent address but copies cost £20 (US$24), too much for most homeless people. So, we became aware that providing free copies of birth certificates made it possible for homeless people to register for services they need. In another example, we learned that people on the verge of serious debt often needed space to ask for help. So, coffee mornings were started where people can ask questions and get help at a much earlier stage. This informal arrangement was far cheaper and more effective than sending bailiffs to recover debt.

Pritpal: Interesting. In the UK, there’s a lot of talk about the austerity agenda; how has that impacted you?

Chris: Austerity and severe cuts – around 50% in core funding for local government where we are – have caused real problems for vulnerable people, not least in social care. They have, however, also prompted more open-minded commissioners to recognise the strengths of local communities. This has created new opportunities to genuinely create solutions with local people, not just provide services to them. It means that local people can take more control of their lives.

Pritpal: You mention control. Previously you mentioned power. What’s your experience of power amongst the residents you work with?

Chris: Often, disadvantaged people feel that they have little, if any, power. This is driven by the messages they receive from agencies, including health care, that focus on needs, problems, disadvantage, et cetera. At first, when people realise they have power, many find it frightening, as they have been used to others doing things to or for them. They will often resist power until confident that they have the capacity to make good things happen.

Pritpal: People resist their own power?

Chris: Often, yes. For me, this experience is articulated well by Darren McGarvey in Poverty Safari, reflecting his experience of poverty in Glasgow, Scotland. There is an understanding that some structural issues, such as spatial planning, are beyond the direct control of local communities and require government action. However, there is often also realisation that local people always had agency, but simply did not know it and therefore have not exercised it.

Pritpal: Fascinating. I know that you started in health but have broadened to other sectors now (or other aspects of people’s lives), so how does Unlimited Potential describe itself?

Chris: In its 17 years so far, Unlimited Potential has reinvented itself every three to four years. This reflects both our own experience and learning, and also a response to the changing environment in which we exist. We presently describe ourselves as a social innovation organisation – we do social innovation for happiness!

Chris: For us, happiness means enjoyment of a full and meaningful life. At the start, many of the people with whom we work feel that their lives have little or no meaning or purpose. If we can support them to find or rediscover this, the changes they achieve are astounding. It almost always leads to positive changes in their health behaviours without ever having to talk about them – it comes naturally.

Pritpal: Amazing. So, to end, what’s on your horizon that you’re most looking forward to?

Chris: As well as continuing to tackle social challenges, we have increasingly realised the impact of inequalities in wealth. We are therefore also planning to explore how to use our relationship-based approach with local communities on economic issues. This is a field that is fundamental, but often seen as difficult or for experts only. But we think it can be tackled. If it is not, many of the other social evils, such as extreme health inequalities, will never really change.

Pritpal: Courageous stuff. Thanks for sharing your work with me.

Chris: Thanks, Pritpal. It has been a pleasure speaking with you.

What fascinates me about Unlimited Potential is how it plays a brokering role. While clearly ‘on the side’ of community residents, it’s also ‘on the side’ of commissioners, wanting to work with them on their problems not just be a conduit to community residents. I find this approach both unique and refreshing – refreshing because, all too often, I find leaders of community-based organisations oddly adversarial with people in systems, such as health care. This bi-directional brokering is, I believe, part of what has helped Unlimited Potential not only endure but also evolve as its environment has. The fact they’re willing to take on economic inequality says much for how centred – and ambitious – they are. 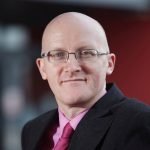 Chris has set up, and supported local people to set up, many social enterprises. He is a Fellow of the School for Social Entrepreneurs and a Fellow of the Royal Society of Arts. A social anthropologist by training, Chris is Chair of the Greater Manchester Social Enterprise Network, an Assembly Member at the Greater Manchester Chamber of Commerce, and Chair of the Northern Soul network of health-related social enterprises. He is a member of the Greater Manchester Devolution VCSE Reference Group, the Salford Health and Wellbeing Board, Salford Social Enterprise City and Salford Social Value Alliance. Chris advises or works with several regional and national bodies on social entrepreneurship and social innovation.