Carl Baty, Executive Director of Rounding The Bases, describes how healing is about being able to express yourself, about people listening, and about acknowledging that what happened to you was not right

In our last post, S Leonard Syme described how public health may have it wrong. While its ‘experts’ have important lessons for people, people have their lives to lead – and the two often do not coincide.

At the symposium, he’ll be in ‘a candid conversation about failure’ with Carl Baty, Executive Director of Rounding The Bases. In this post, we hear from Carl.

The text below will be a Foreword to our 2017 report that will describe the field of practice that is bridging health systems and local communities.

What could I possibly know about health? My last experience was in Sinai Hospital, Baltimore. I’d been jumped by a bunch of kids. I came to after four days. After four more days of needles nobody had bothered to tell me what was wrong with me. I stated I would not let anyone do anything else until I saw a doctor. I was ‘discharged’ the next morning.

Me writing this Foreword started when a group of MIT grad students asked if I would participate in a survey on how development affects health. We met, together with other residents, in the offices of one of the biggest developers in the area. Right across the street was a park full of indigent people, sitting daily, drinking. My statement was that an area will remain as sick as the sickest member of the community.

Statistics show that health improves as development comes. But does the health actually improve or does development bring in healthier people, displacing the poorer, the less healthy? It’s hard to know. No identifying information can be collected on those that are surveyed. Those people in the park are made invisible.

Surveys about health are all well and good but often get in the way of talking about what really matters. Having come out of a 47-year addiction, I could certainly identify with the people in the park, what it feels like to be made invisible. I asked if the survey could be an opportunity to heal. Healing is about being able to express yourself, about people listening to you.

No one ever wanted to hear what I had to say. They told me it was an excuse to make up for my ‘deficiency’. There have been multiple times in my life when I was the first, the best, but denied because of my color. The grad students listened even though I am the first to admit I don’t have the answers. I find myself in a totally foreign situation.

After I was discharged from Sinai Hospital, I found out that I had suffered a skull fracture. The needles were a blood thinner to prevent clotting on the brain. My chart was notated that I left against medical advice. I was basically sent home to die. But I was homeless at the time, living in an abandoned house. More truthfully, it was a crack-house. I was unable to pay for treatment so what else should I expect?

The grad students introduced me to Dr Tamber, one of the authors of (the forthcoming) report. What started out as a survey has morphed into so much more, a symposium, a Foreword. I get the picture. We come from different sides of the tracks. You all lived a life over here, while my life was lived over there. What happens when everyone starts to realize just what over there is like?

Healing is about acknowledging that what happened to you was not right. It’s not necessarily about getting answers right away. Achieving that requires trust, which requires space and time – the space to connect with people and the time for that connection to become material. It’s about being offered a seat at the table, experiencing the divine feeling of acceptance, and being able to accept the others at the table in return.

And then figuring out how to get to work. 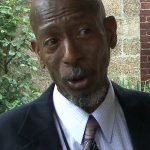 Executive Director at Rounding the Bases

2 thoughts on “Symposium 2017: A Candid Conversation About Failure: Part II”